Our message to you 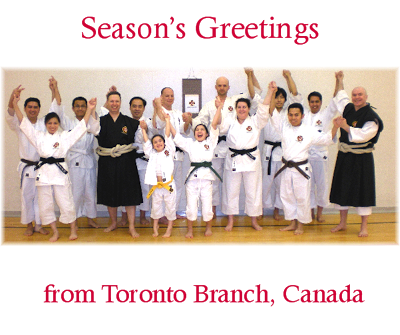 On the evening of December 19th, the members of Toronto Branch gathered together for our final practice session of 2012.

We were very happy to be joined by Toronto Branch alumni Louie-sensei (Yorkville Branch) and Paul Turner-kenshi.

Our event included Chinkon-gyo, a lecture on the accomplishements of 2012 and goals for the coming year, and a performance of technique by current members.

After the event we headed over to the Free Times Cafe for food, drink and more of Yan's stories!

Here are some photos from our event. 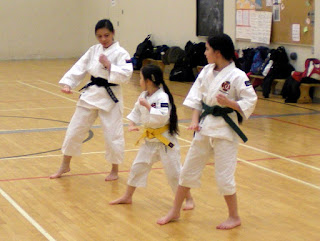 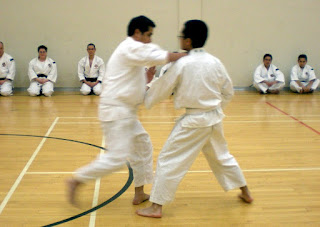 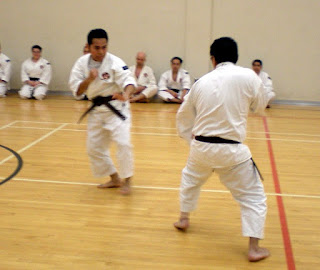 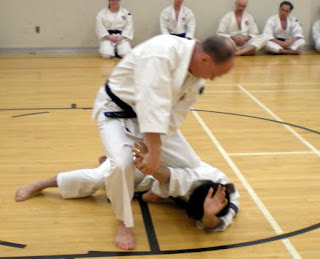 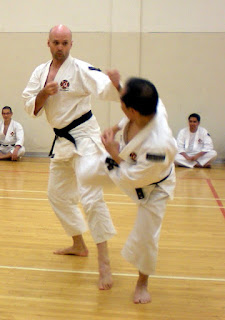 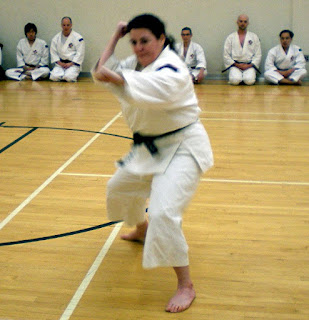 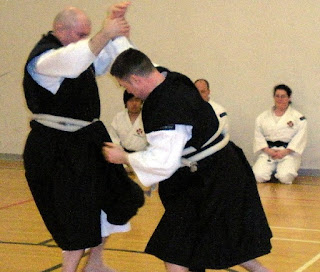 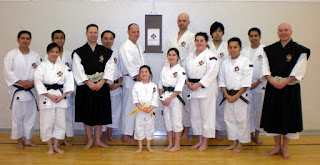 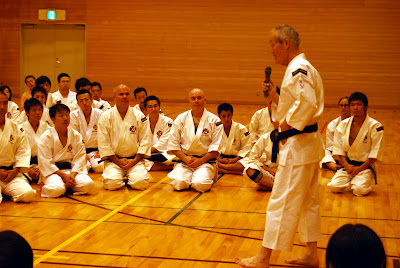 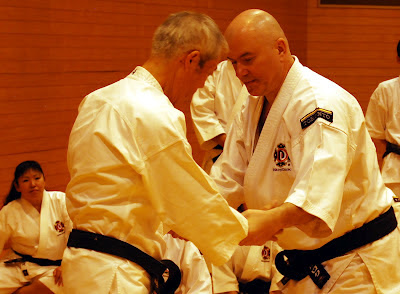 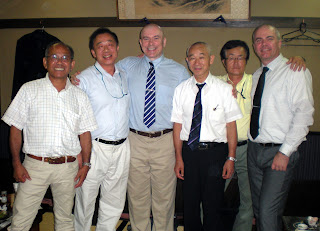 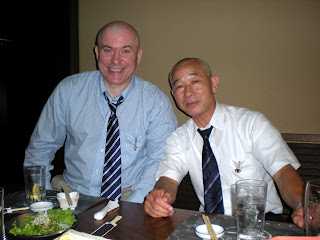 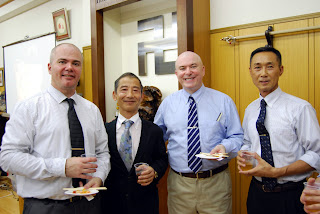 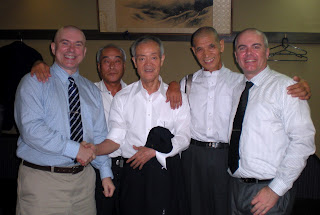 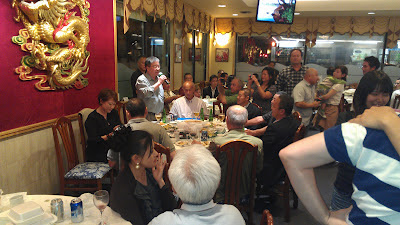 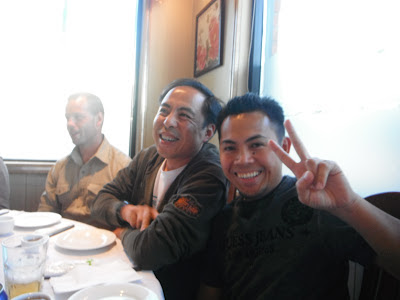 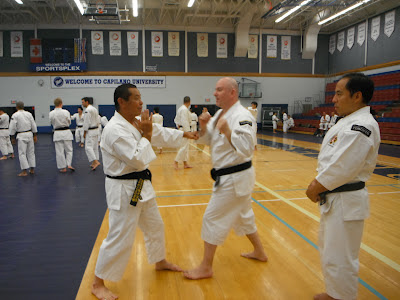 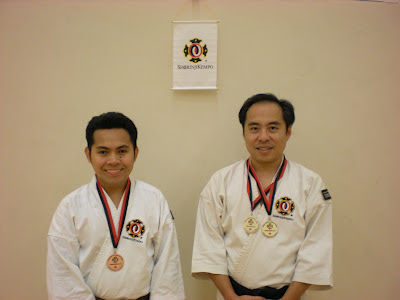 
Four Toronto Branch kenshi were successful in recent gradings held on June 24th at the JCCC:
We'd like to thank Louie sensei and Fontaine sensei for conducting the exams.

Congratulations to our members on their success!

On Friday May 25th, five members of Toronto Branch set off on the long drive to Trumansburg, NY to take part in the 34th Annual Shorinji Kempo Cornell Camp.

The event is the longest continuously running Shorinji Kempo event in North America and it holds a special place in the hearts of Shorinji Kempo members in the Eastern US/Canada region.

For the first time in six years, both Sakuyama sensei and Atsumi sensei were able to come from Japan to lead the training. The teachers are direct students of Kaiso So Doshin (founder of Shorinji Kempo) and exemplify excellent technical and philosophical understanding of the art.

We attended the first two days of the Camp and on each day Sakuyama sensei taught in the AM session and Atsumi sensei in the PM session.


As before, a great deal of attention was placed on basic aspects of body movement and stance before using these principles in technique.  The impact of this approach was dramatic - kenshi who had previously struggled to make good form suddenly appeared graceful and smooth in their movement.

One great feature of the Camp was an open Q&A Session with the teachers on Saturday evening.  Some of the topics discussed included
The Cornell Camp is located in a lush natural environment.  This year's wildlife tally included deer, rabbits, chipmunks, a water snake, a toad, a crawfish and a gazillion tadpoles.

All of us from Toronto Branch had a wonderful time and learned many valuable things.

We wish to thank Sakuyama sensei and Atsumi sensei for coming all the way from Japan to teach us and also the Camp organizers for their selfless efforts in facilitating yet another excellent training opportunity.

Our 17th Annual "Kickathon" was a success!


It was another hot and airless night in the main gym of the Centre for Addiction and Mental Health (CAMH) as we each performed 500 kicks with a hearty kiai. Wishful thoughts of oxygen masks were combined with a feeling of accomplishment as we struggled on.

The reason for this physical anguish was our 17th Annual Charity "Kickathon" in aid of drug addiction treatment programs offered by CAMH.  Thanks to our many generous sponsors we were able to raise $7,520 this year for this important cause. 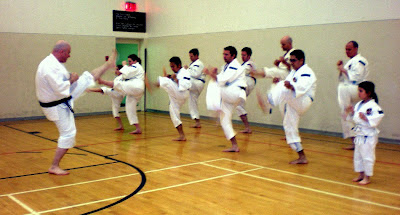 Shorinji Kempo was founded in Tadotsu, Japan by Kaiso Doshin So in 1947 and has since then spread across the world.  Kaiso intended Shorinji Kempo to be more than just a martial art - he hoped that its members would play a positive role in society.  Every year in the month of May, Shorinji Kempo members all over the world engage in charitable and community events as a concrete reminder of Kaiso's goals.

Shorinji Kempo Toronto Branch has chosen to assist CAMH in its efforts to combat drug addiction as its annual "Kaiso Day" activity. Drug addiction is one of the most powerful and devastating maladies of our our modern age. It not only leads to the destruction of the addict's life but has numerous community impacts too. 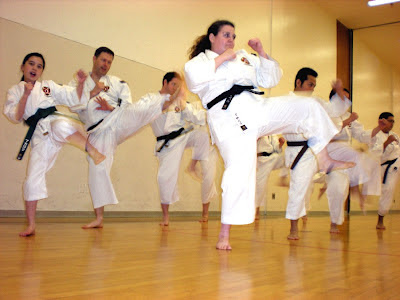 It is clear that many centralized approaches have had limited effectiveness in dealing with this issue (see the US "War on Drugs" for example).  However, providing help to those who wish to quit is a high payoff investment with an impressive success rate.  It is this type of approach that our event supports.

We would like to thank our many family members, friends, business donors and colleagues for their generous ongoing support of our charity event.

We also wish to recognize the great efforts of CAMH in helping Canadians overcome the challenges of addiction and mental illness.

The CAMH event  donation page will be online for a few more days, so please donate! 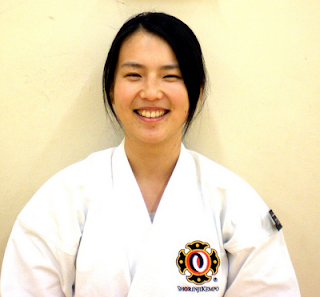 It was a great experience practicing Shorinji Kempo at Toronto Branch. I was happy to join there as my first Dojo outside of Japan from September 2011 until March 2012.

I was a bit nervous before joining since I didn't know what to expect, however McCulloch sensei and every Toronto Branch member welcomed me warmly. I realized that in Shorinji Kempo it is possible to bridge between countries. Everybody at Toronto Branch practices seriously and has fun.

Training at Toronto Branch had the same feeling as I was used to in Japan and my experience there gave me great friendship with the members.

I highly recommend for Torontonians and Japanese Kenshi to join practice at Toronto Branch. 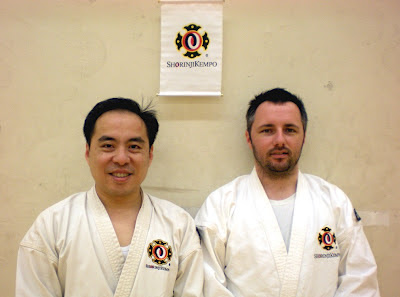 Toronto Branch members have been successful in recent dan gradings.

We'd like to thank Louie-sensei and Fontaine-sensei for conducting the examinations.