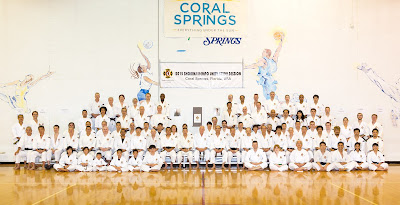 Back on the road again.  This time three members of Toronto Branch attended the Shorinji Kempo UNITY Seminar in sunny Coral Springs, Florida from July 11-12 (inclusive).

Most US and Canadian Branches were in attendance. For Canada, there were members present from Alberta, BC Tozenji, Yorkville, North York and Toronto branches which permitted a rare chance to discuss Canadian Federation matters face to face. 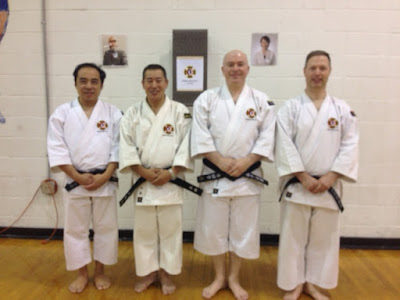 The teacher for the seminar was Kazuhiro Kawashima sensei (Seihanshi, 7th dan) from Hombu.  As expected, he taught in a very dynamic and energetic way including expert instruction in goho, juho and randori.

The second day covered practical instruction from Kawashima sensei in judging and refereeing for gradings and taikai.  All of us had the chance to take part as both examinee and referee.

Since this was a UNITY seminar, the content included Hokai lectures.  The Hokai ranking system covers Kongo Zen philosophy and can confer a "philosophy" rank to members who elect to study the special content.

The event was incredibly well organized and managed. From an attendee's point of view everything went smoothly and efficiently (which means that there must have been frantic activity behind the scenes!).

We wish to express our sincere gratitude to Tondo sensei, VanAnh kenshi and the rest of team at South Florida Branch for their huge efforts on our behalf.