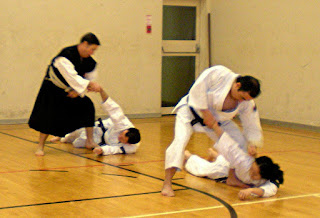 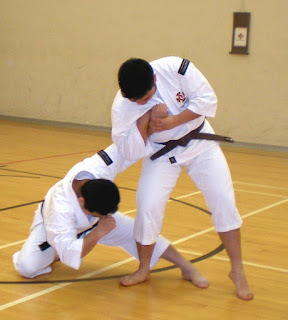 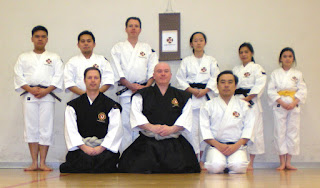 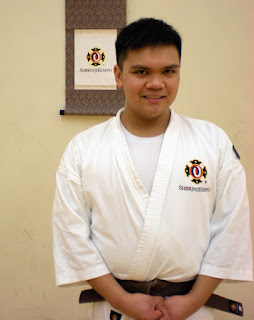 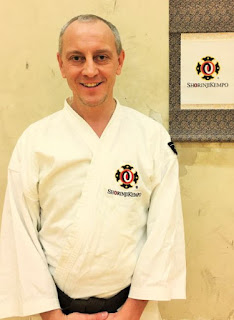 From July 1-3, 2016 kenshi from branches all across North America traveled to Banff, Alberta to attend the WSKO North American Study Session and Taikai.  These events were provided by the Canadian Shorinji Kempo Federation and expertly hosted by the members of Alberta Branch who set a new high standard for other hosts to follow.

The session began with Arai-sensei providing a concise and clear outline of Shorinji Kempo basics and etiquette.  His teaching style was easy to follow and his demonstrations were of textbook quality (perhaps because he was a student of "the living textbook" Tsunehiro Arai-sensei). However, once the basic principles were established, Arai-sensei quickly moved on to more challenging applications including jumping sokuto geri combinations!

Kawashima-sensei picked up the teaching role later on and emphasized the correct form for tan'en hokei as well as the sotai applications. During his sessions, Kawashima-sensei showed dramatic effectiveness of his application of goho and juho techniques.


In addition to the Hombu staff, the US-based WSKO Instructors (Hirayama-sensei, Harada-sensei and Hagata-sensei) gave exciting lessons to the kyu kenshi in attendance.


During each day of the Study Session, Kawashima-sensei provided lectures on topics drawn from his experience and our philosophy. In addition, time was spent reviewing plans for the World Taikai in California next year.


On the Saturday, Alberta Branch provided a wonderful social event at the Toque Bar in Banff.  A fun aspect of the event was the presentation of the famous Alberta white hats to the WSKO Instructors! All delegates greatly enjoyed the chance to mingle and relax with fellows from all across our continent.


The final day of the activities was the 5th North American Shorinji Kempo Taikai held at the Banff High School.  The event began in an impressive way with the Royal Canadian Mounted Police ("Mounties") escorting in the national flag of Canada prior to singing the national anthem.

As for the Taikai itself, the sections were
Christian Castillo from Toronto Branch participated in the Dan Grade Men's Tandoku Embu section and Men's Lightweight Dan Grade Unyo'ho achieving a high place in both events. Chrtistian greatly enjoyed his participation and will be using the experience gained to prepare the World Taikai next year.

All of us from Toronto Branch had a wonderful time in Banff and wish to express our sincere gratitude to Noda-sensei, the kenshi of Alberta Branch and all their supporters for their painstaking efforts in organizing these events and for all the kindness and support they extended to all delegates.


On Friday May 27th, two members of Toronto Branch and two members of North York Branch ventured to Camp Barton near Trumansburg NY to participate in the 38th Annual Shorinji Kempo Cornell Camp.

Tucked away in the Finger Lakes of northern New York State, Camp Barton provides a beautiful setting to study the philosophy and techniques of Shorinji Kempo taught by Sakuyama-sensei (Ibaragi Takahagi Doin, Japan), former staff member at Hombu and direct student of our Founder – Kaiso So Doshin-sensei.

This year the emphasis was on a return to basics in order to explore how our inner body moves from the moment we become aware that a technique is about to begin (slight shift of weight to balls of your feet), through the transfer of energy as the technique is executed and a quick return to stasis at the completion.  Each technique should be performed with full attention to the moment without anticipating what’s next.

During a talk, Sakuyama-sensei shared stories about his experiences interviewing with Kaiso as he applied to become a monk and to live at headquarters.  After careful consideration Kaiso welcomed him to headquarters where Sakuyama-sensei quickly found that during the off-season most of the time is spent cleaning and repairing the facilities.  It wasn’t until the summer months that he fully appreciated his decision as the great masters journeyed from all across Japan to headquarters in order to participate in events.  He was thrilled to be able to continuously watch and learn from so many great teachers.  He continued to describe how his master, Nakano-sensei (Kaiso had stopped teaching techniques at this point), instructed him to restudy the basics.  Surprisingly it only took three years of near constant practice for him to realize the benefits of Nakano-sensei’s lesson about the importance of returning to the basics.

We were also fortunate that Miyata-sensei, the original founder of New York City Branch, was also in attendance.  He would often appear at just the right moment while we were trying to figure out the subtleties of a technique in order to guide us in the correct way.

On the second day of practice, the warm-up session was led by two Kenshi that took us through a study of aspects of body movement and breathing with a special emphasis on opening the hip flexors to allow for improved hip movement in order to make our techniques more effective.

Sakuyama-sensei continued his emphasis on the study of Kihon carefully checking each of us individually to ensure a strong foundation.
Another focus area of this year's camp was a conversation about evolution of Shorinji Kempo. After demonstrating one technique (kote nage), Sakuyama sensei spend considerable amount of time asking branch masters on their approaches to different complications during execution of the throw (for example, an extended arm of an opponent). The goal was not to change the form to a different technique, but to share the approaches on what can be done to successfully complete the form. After that, in on of the stories, Sakuyama-sensei told us that Shorinji Kempo Head Quarters very much values the differences in how different masters evolve the basic techniques. We learned that Hombu has an "R&D" department, that has a mandate to collect the insights of how techniques develop in different parts of the country and that of the world, and makes the decisions on what the basic forms and variations of techniques are. Sakuyama-sensei emphasized that even though there are "golden standards" of how the forms should be performed, each Kenshi still needs to "have duologue with the body" and perform the techniques in the way that works for him or her, e.g. knee lift heights during the basic kicks to ankle, knee or thigh area.


We wish the thank Sakuyama-sensei for coming all the way from Japan to teach us and the Camp organizers for their selfless efforts in facilitating another fantastic training opportunity.

We hope to see everyone again next year!

On the evening of Monday May 9, the members of Shorinji Kempo Toronto Branch gathered in the CAMH Main Gym to hold our 21st Annual Shorinji Kempo Charity Kickathon for CAMH.

It is a tradition in Shorinji Kempo that all members perform some form of community service in the month of May to honor the legacy of our founder Kaiso Doshin So, especially his emphasis that personal development must be aligned with concrete action to help others.

In our Kickathon we perform 500 full power kicks with kiai (yell!) in return for sponsorship.  One of the hardest things about it is the lack of inhalation during intense activity! This year we seemed to have gotten off lightly in terms of ill effects, but most of us experienced leg pain after a two day lag (unusual).

Thanks to our extremely generous sponsors we were able to raise $9,115.00 this year.

Since our event began we have raised $139,255 for the CAMH Foundation. The funds raised in the Kickathon are used by CAMH to support drug addiction treatment programs and research into the causes of drug addiction.  Our hope is that individuals trapped in addiction will be able to reach permanent and contented recovery via this funding.


We would like to express our sincere gratitude to all of our wonderful sponsors and also to Lidia and her team at the CAMH Foundation for all their assistance with our 2016 Kickathon event.